In recent years the technical requirements for finishing the surface of complex, high-value components have become a lot more stringent. Because of increasing competitive pressures customers are not only demanding stable finishing processes with perfect results but also a higher degree of automation. Rösler meets these requirements with innovative solutions for the efficient, automated processing of precision components, even regarding targeted finishing of specific surface areas on work pieces. 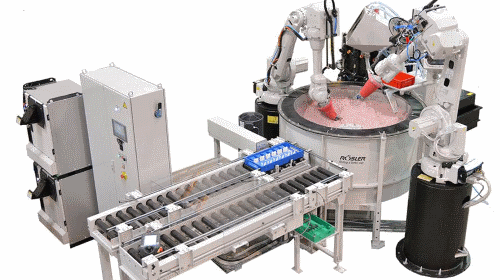 The innovative Surf-Finisher opens new possibilities for the fully automatic processing of components with complex shapes. It even allows the targeted deburring, smoothing and polishing of specific surface areas on work pieces. © Rösler Oberflächentechnik GmbH

For decades mass finishing methods have been successfully used for deburring, edge radiusing, surface smoothing and polishing of mass-produced parts in batch or continuous feed systems. Nowadays, however, there is a growing demand for the defined finishing of single, high value components with complex or freeform surfaces that cannot touch each other during the process.

For the reliable and efficient treatment of such components Rösler offers various new and improved systems, which guarantee absolute repeatable finishing results. They allow the all-around surface treatment of the work pieces or the targeted finishing of specific surface areas in fully automatic processes that can be perfectly integrated into complete manufacturing lines.

With its many technical features the innovative Rösler Surf Finisher opens completely new possibilities for the precise, targeted dry or wet surface treatment of complex components. The heart of this finishing center consists of one, occasionally, two 6-axis robots and a rotating work bowl filled with specially selected grinding or polishing media. The work bowl comes in different sizes allowing the treatment of relatively large components or the simultaneous, entirely touch-free finishing of multiple work pieces.

The robot fulfills two functions: For one, equipped with a specially designed gripper, it performs a material handling task by picking up the work pieces from and returning them to a transport belt, immersing them into the work bowl and conveying them to a cleaning/rinsing station. In a second function the robot is guiding the work pieces through the processing media in pre-programmed movements including defined treatment angles, different immersion depths and rotary motion. This flexibility allows the targeted finishing of specific surface areas on the work pieces.

During the complete process the work bowl with the processing media is also rotating at a speed of up to 80 RPM. The actual speed is determined by the work pieces to be treated and the respective finishing task. The robotic movement and the work bowl rotation create a “surfing” effect with a very high pressure between work piece and media. This pressure with the concurrent intensive surface smoothing effect produces perfect finishes within relatively short cycle times. Even with complex work piece geometries surf finishing generates surface readings of as low as Ra = 0.04 µm (1.6 micro inches). 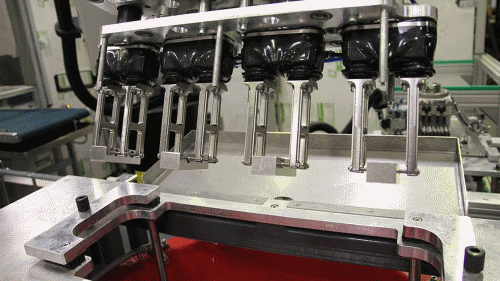 During the HFF process the robot immerses the rotating work pieces mounted to a specially designed gripper into the media agitated by vibration. The finished work pieces undergo a subsequent rinse cleaning process. © Rösler Oberflächentechnik GmbH

The newly developed Rösler High-Frequency-Finisher (HFF) also includes one or multiple robots with the dual function of material handling and programmed movement of the work pieces through the processing media.

In the innovative HFF systems the media for dry or wet processing in the work bowl is agitated by vibration with a speed of up to 3,000 RPM. The robot, equipped with a specially designed gripper, immerses the work pieces into the agitated media. The dual movement of robot and media results in a high pressure and an all-around, highly intensive treatment of the parts. During the process the robot may completely remove the work pieces out of the media, turn them and immerse them again.

In order to completely automate the deburring of precision components like tool bodies, drag finishers like the model R 6/1000 SF-Auto were completely redesigned to allow robotic loading/unloading of the work pieces. © Rösler Oberflächentechnik GmbH

Another technological marvel created by Rösler engineers is the redesign of the drag finishing systems to allow loading/unloading of the work pieces by robot or dedicated material handling system and thus, fully automatic operation without any operator involvement whatsoever! This concept was implemented at Walter AG.

This globally active company and leading supplier of precision machining tools uses Rösler drag finishing technology for fully automatic deburring of a variety of different-sized tool bodies. The custom engineered system consists of two interlinked drag finishers with six (6) working spindles each and a robot that fully automatically mounts and dismounts the components to and from the spindles. This high-precision finishing process required a special safety load system that was developed by enveloping surface modeling and load pattern simulation.

The positioning of the spindles requires a precision of 0.1 mm (0.003”), and the exact carousel location is determined by the controls of the drag finishing system. To ensure that no crash occurs electronic initiators continuously monitor the correct pneumatic coupling of the work pieces to the spindles.

Different tool bodies are ”dragged” through the stationary processing media at different speeds, immersion depths and treatment times in line with pre-set programs stored in the PLC. After completion of the cycle the robot removes the tool bodies, moves them to a rinse cleaning station and then deposits them on a tray.

This new Rösler drag finishing system allows fully automatic dry or wet processing without the work pieces ever touching each other. To date such components had mostly to be deburred, smoothed and polished manually, which is not only costly but produces somewhat erratic finishing results. The new technology represents a significant milestone towards the stable and efficient surface finishing of orthopedic implants, geared components, machining tools and all kinds of automotive and aerospace components.