The difficult path to "green" metal

As a result of new production processes and new environmental awareness, the issue of climate protection is increasingly coming to the fore of large steel processing companies. In addition to ISO standards, there are many concrete approaches to make metal production more ecological. Adaptation in the factory offers advantages in terms of funding. In some cases, it is more cost-effective than previous processes and it protects the environment.

ISO Standard 14001 as the measure of all things

The principle of the standard is simply explained: The company's balance sheet is to be improved in four steps. First the plans are implemented in production, then checked and after that optimised. In order to observe the effect of the improvement, a material flow analysis is carried out beforehand and again afterwards. This ideally indicates an improvement after the adjustment.

Worldwide, around 360,000 companies adhere to the ISO standard, in Germany 8,000 companies - from SMEs to stock exchange concerns - are certified accordingly. 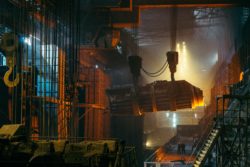 Why use new materials when, with little effort, used ones can be recycled? For a long time now, the utilisation of metals that have already been used has not been a new aspect; especially the melting of aluminium is common practice.

The industry also needs a lot of water, which in the past was not often reused. Thyssenkrupp now recycles 97 per cent of the used water so that it can be reused in production. Contamination is removed, if necessary, between up to 40 uses. In this way, the company can not only conserve local waters such as the Rhine but at the same time save costs.

Resulting by-products such as gases or slag can be specifically separated and discharged in the process in order to enable further processing. Blast furnace slag is processed into granulated slag, which can be used in the production of concrete. In theory, CO2 can also be completely separated so that it does not escape into the environment. "Carbon Capture and Storage” (CCS) stores carbon dioxide in many different ways. Thus, in the future, empty natural gas or oil reservoirs underground will serve as pressure chambers for CO2. This would allow climate-friendly - albeit not climate-neutral - production. Some electricity companies are already separating the gas in order to store it for testing purposes.

For example, Thyssenkrupp relies on "Carbon2Chem": CO2 is largely converted into ammonia in this process, which in turn can be used sensibly in other processes.

Green electricity instead of coal base load

Germany's electricity-energy mix is largely based on coal and nuclear energy. Renewable energies such as wind power or photovoltaics are only switched on if they can be generated. At night, photovoltaics are completely eliminated as an energy source; wind power depends on the current weather situation. Blast furnaces and melts, however, run around the clock and cannot stop production without further ado.

This is where new energy storage systems come into play: Reduced production costs and long-lasting storage technologies can drastically change the metal industry over the next 20 years. Less expensive and more powerful lithium-ion batteries are constantly falling in price, and solid accumulators are getting ready for the market. Super-capacitors compensate for peak loads without any problems. By storing solar energy gained during the day and using it in continuous operation, the environmental balance of arc furnaces could be significantly reduced. However, before the required amounts of energy can be covered by energy storage systems, it will take some time.

Smelters at the environmental limit 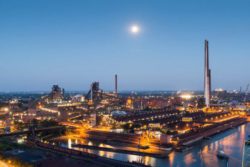 The emissions trading system is a particular problem for the European steel industry: In order to remain competitive, CO2 certificates would have to be issued free of charge. Otherwise, the certificate would cost around 20 euros for every tonne of gas emitted. In an international comparison, Europe's steel would no longer be affordable and the companies would simply change location. The migration of the steel industry would only shift the problem; however, it would not improve it.

An additional reduction in greenhouse gas emissions in the further processing of steels has been pursued for many years. The European industry has already been able to save 20 per cent of CO2 emissions through ongoing process improvements. According to a study by the Boston Consulting Group, there is only around a ten per cent optimisation potential for classic steel furnaces.

Hydrogen instead of coking coal

Thyssenkrupp's blast furnaces in Duisburg-Bruckhausen have been producing metals for more than 100 years - always using the same process: Iron ore plus coking coal equals iron. This process, however, requires a great deal of energy and is one of the most environmentally damaging.

The concern would like to revolutionise iron production for around ten billion euros: With hydrogen, a so-called iron sponge can be formed by reduction, which is then melted in an electric furnace. This saves a lot of carbon dioxide.

However, unreacted hydrogen is relatively rare and must be produced with high energy consumption. Here, value must be placed again on using "green" energy – otherwise, the great effort would ultimately only be a regrouping of CO2 emissions from the blast furnace to the coal-fired power plant.

thyssenkrupp Steel Europe is one of the world's leading suppliers of steel products. With around 27,000 employees, the company supplies high-quality steel products for innovative and demanding applications in a wide range of industries. Customer-specific material solutions and services for steel complete the product range.
More at thyssenkrupp